Last Tuesday 5th October RELYUM was invited to the inauguration of Iberdrola’s Global Smart Grids Innovation Hub. The Chairman of Iberdrola, Ignacio Galán, and the general representative of Bizkaia, Unai Rementeria, officially opened the Global Smart Grids Innovation Hub, one of the company’s strategic projects which, from Bilbao and for all international markets, will work on developing tomorrow’s grids, the cornerstone of the energy transition. 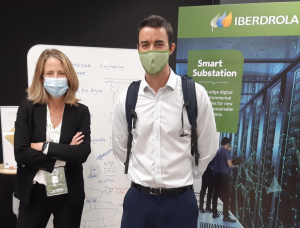 The center was created with the aim of accelerating innovation and R&D in the true nervous system of decarbonization: smart grids. A hub that combines cutting-edge technology, research, training and entrepreneurship and is equipped with the latest innovations in digitization, AI and advanced data analysis, among many other fields and acts as a driving force for innovation, combining the technological capacity of the company with that of its collaborators: suppliers, universities, technology centers and start-ups.

RELYUM has been participating in the Technical Committees of the Hub since its beginnings and, as a result, it has become the first company to be contracted for developing a new and innovative project for implementing substation remote testing with significant cost savings for the Utility.

The new project was presented to the authorities attending the inauguration, as part of the activities of the event.

RELYUM is pioneer in developing a portfolio of devices that implement the leading-edge networking and synchronization technologies for critical systems.

Its technology has been applied in more than 100 projects worldwide and in very different applications like Electric, Industrial and Aerospace sectors.

We use cookies on our website to give you the most relevant experience by remembering your preferences and repeat visits. By clicking “Accept All”, you consent to the use of ALL the cookies. However, you may visit "Cookie Settings" to provide a controlled consent. Visit the legal warning page for more info.
Cookie SettingsAccept All
Manage consent

This website uses cookies to improve your experience while you navigate through the website. Out of these, the cookies that are categorized as necessary are stored on your browser as they are essential for the working of basic functionalities of the website. We also use third-party cookies that help us analyze and understand how you use this website. These cookies will be stored in your browser only with your consent. You also have the option to opt-out of these cookies. But opting out of some of these cookies may affect your browsing experience.
Necessary Always Enabled
Necessary cookies are absolutely essential for the website to function properly. These cookies ensure basic functionalities and security features of the website, anonymously.
Analytics
Analytical cookies are used to understand how visitors interact with the website. These cookies help provide information on metrics the number of visitors, bounce rate, traffic source, etc.
SAVE & ACCEPT