Relyum in the CONNECTA-2 Project

In this new post, we talk about the CONNECTA-2 Project and how we have been involved in it, using our Time Sensitive Networking (TSN) solutions to implement the backbone known as ECN-ETN networks in the railway architecture.

What is the CONNECTA-2 Project?

CONNECTA-2 aims at contributing to the Shift2Rail’s next generation of TCMS architectures and components, combining the new drive-by-data concept for train control together with wireless information transmissions.
The specific actions to be undertaken within the scope of CONNECTA-2 contributing to the above high level targets are: 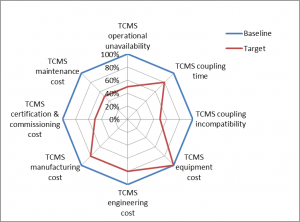 (This information was taken from : https://projects.shift2rail.org/ webpage)

Relyum in the Connecta-2 project

One of the technologies that has been considered in this project is Time-Sensitive Networking as a great candidate for implement the backbone network known as ECN-ETN networks in a railway architecture. To perform the validation that was considered as part of this project, CAF used one of RELYUM’s most popular TSN testing tool: RELY-TSN-LAB.

RELY-TSN-LAB can simulate surges conditions and other interferences In the network by forcing FCS (CRC) errors in selected frames. Last bit of the check sequence is changed leaving the rest of the frame untouched.

Additionally, the device permits the measurement of the bandwidth and latency of a certain traffic in a specific device or network segment. This feature is performed by hardware timestamping the packet before it is injected in the network or device under analyse and after receiving it from the network or DUT.

The timestamp of the packets is based on the IEEE 802.1AS synchronization, which becomes an important benefit when used in Deterministic networking. The timestamps can be stored along with useful package information that can be post-processed in order to generate performance results about IEEE 802.1Qbv.

In particular, the railway company used RELY-TSN-LAB for validating the behaviour of IEEE TSN standards in the ECN, the correct traffic shaping, scheduling and filtering in Qav, Qbv and Qci.

We use cookies on our website to give you the most relevant experience by remembering your preferences and repeat visits. By clicking “Accept All”, you consent to the use of ALL the cookies. However, you may visit "Cookie Settings" to provide a controlled consent. Visit the legal warning page for more info.
Cookie SettingsAccept All
Manage consent

This website uses cookies to improve your experience while you navigate through the website. Out of these, the cookies that are categorized as necessary are stored on your browser as they are essential for the working of basic functionalities of the website. We also use third-party cookies that help us analyze and understand how you use this website. These cookies will be stored in your browser only with your consent. You also have the option to opt-out of these cookies. But opting out of some of these cookies may affect your browsing experience.
Necessary Always Enabled
Necessary cookies are absolutely essential for the website to function properly. These cookies ensure basic functionalities and security features of the website, anonymously.
Analytics
Analytical cookies are used to understand how visitors interact with the website. These cookies help provide information on metrics the number of visitors, bounce rate, traffic source, etc.
SAVE & ACCEPT