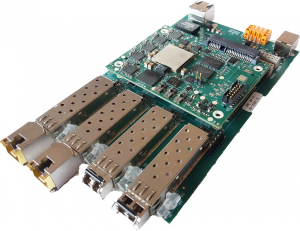 Evaluating the performance of high-speed networks is a critical task due to the lack of reliable tools to generate traffic workloads at high rates. The current open-source software tools are not suitable to deal with high-speed networks like Ethernet based, as they present poor performance in terms of generated frames per second and scarce timing/rate accuracy in traffic generation. These issues are due to the intrinsic limitations of the PC architecture, for which these tools are designed.

Being aware of that, RELYUM has developed a traffic generator based on an FPGA SoC design, which allows to generate and transmit up-to 3 Gbps real throughput traffic into the network. Additionally, the device supports traffic characterization through CLI to enhance the accuracy of the tests.

This device results on a perfect complement for evaluating TSN (Time-Sensitive Networking) and HSR/PRP “Zero-packet lost” networks together with other RELYUM products.

In the following link you can check every feature that the RELY-TRAF-GEN supports as well as its brochure!

RELYUM is a pioneer in developing a portfolio of devices that implement the leading-edge networking and synchronization technologies for critical systems.

Its technology has been applied in more than 100 projects worldwide and in very different applications like Electric, Industrial and Aerospace sectors.